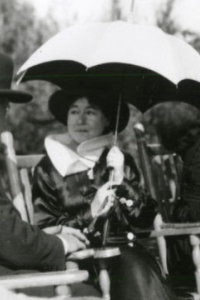 Be Natural, Pamela Green's documentary on Alice Guy, will screen on October 7 at 6 pm as part of the New York Film Festival.

The image shows Bessie Love (left) and Alice Guy (under umbrella) on the set of The Great Adventure or the Spring of the Year, released March 10, 1918. Over a hundred years ago! The Great Adventure is the last surviving film we have directed by Alice Guy, though she worked on one more after that (Tarnished Reputations).