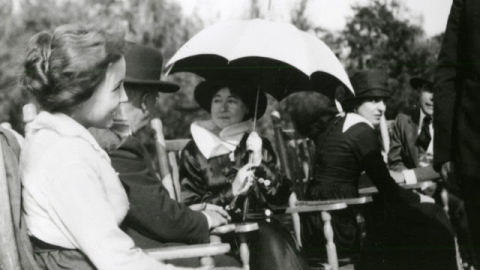 Be Natural, Pamela Green's documentary on Alice Guy, will screen on October 7 at 6 pm as part of the New York Film Festival.

The image shows Bessie Love (left) and Alice Guy (under umbrella) on the set of The Great Adventure or the Spring of the Year, released March 10, 1918. Over a hundred years ago! The Great Adventure is the last surviving film we have directed by Alice Guy, though she worked on one more after that (Tarnished Reputations).

Green purchased the film rights to my book, The Lost Visionary, as part of the development of the film.

This screening follows the premiere at the Cannes Film Festival and a screening at Telluride. The film length has now been cut to 103 minutes. Narrated by Jodie Foster.

Read more about the film here.

Along with the film, there will be a conversation with film preservation experts about Alice Guy-Blaché’s contributions to cinema. Guests will include Jane Gaines, Susan Lazarus, and Joan Simon. Clips will be screened from Guy-Blaché‘s work. This event will take place October 9th at 7 pm. Admission is free.

If you are on the other side of the pond, you can catch the film at the London Film Festival on October 11th or 21.