The First Films Shot in Spain 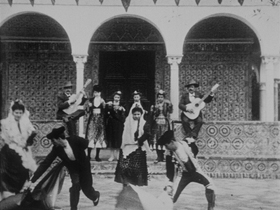 I just completed a translation and edit of  Stereotypes and Archetypes in Early Spanish Cinema by Francisco Griñán for the New Review of Film and Television Studies. The paper is a case study of how national archetypes and stereotypes get put into place.

The New Review rarely prints images, so I am posting some images here relating for the earliest films ever shot in Spain. Some of these films were made by Lumière operators as early as 1897. Alice Guy spent six weeks traveling around Spain making silent and synchronized sound films (phonoscenes for the Chronophone) in 1905. All of us interested in early cinema owe a huge debt to Griñán for dedicating ten years of his life to his research on early cinema in Spain.

The first films in Spain were shot by Lumière operator Alexandre Promio in Madrid in 1896. The earliest surviving  Lumière  films shot in Spain, by an unidentified film operator, are these, filmed in Seville in 1898: scenes of Holy Week (Procession à Séville I, II and III, No. 857-859), views of the Andalusian city (Rue à Séville, 855, and Foire de Seville, 856) and several bullfighting films (Transport of cages, 860; École de tauromachie, 861, and Running of the bulls, 862).

The same film operator also shot the actuality series Danses espagnoles, numbered in the original catalogue from 843 to 854. These films exist, but I have not seen them, nor is video publicly available. Here are some images (this is the source):