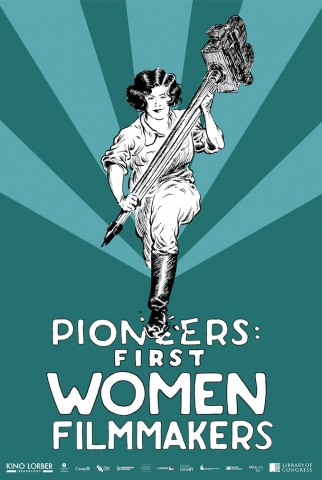 The film and video distribution company, KinoLorber, working with the Library of Congress, will release a DVD collection of films by the first women filmmakers in November of 2018. Just in time for Christmas gift giving!

Here is the BAM Cinematek's description of the program:

In the Wild West days of early filmmaking—before Hollywood hardened into an assembly-line behemoth and boys’ club—talented women worked regularly as writers, producers, and directors, instrumental in shaping the very language of cinema as we know it. Nevertheless, figures like Alice Guy Blaché and Lois Weber are known today primarily by aficionados, and artists like Nell Shipman, Grace Cunard, and Marion E. Wong remain woefully obscure. Bringing together dozens of essential new restorations, this series spotlights the daring, innovative, and trailblazing work of the first female filmmakers and restores their centrality to the creation of cinema itself. – BAMCinematek

This summer selections from the program have been screened in different places around the country. If you are in LA, you can still see some of the films at LACMA. Too Wise Wives (Lois Weber, 1921) will screen on August 21, and Linda (Dorothy Davenport-Reid,1929) screens August 28.

The program will also screen at the DeBartolo Performing Arts Center in Notre Dame, IN, on September 18, and in the Rose Theatre, in Port Towensend, WA, from September 28 to October 4. Check the Kino Lorber Page for other screenings.

What the critics are saying about the program:

"A corrective to our collective amnesia. A thrilling look at the variety of films made by women, most before they won the right to vote." – Manohla Dargis, The New York Times

"Provides a rare opportunity to see some of the greatest films helmed by early Hollywood’s intrepid women... It locates women working within the system, in all roles and at all levels, who gave cinematic life to our perspectives.... As cinephiles continue to recognize the importance of reviving what’s been lost to time, the hope is that efforts like “Pioneers” will continue to crop up, filling in the blanks of the past and reclaiming the medium’s forgotten stories." – Christina Newland, Village Voice

“Pioneers: First Women Filmmakers mounts a convincing case for familiarizing oneself with the output of early women filmmakers—and for seeing their films on the big screen.” – Rebecca Pahle, Film Journal International