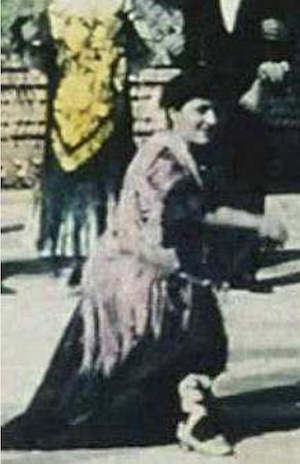 Although we can't be sure who filmed the 1905 Gaumont hand-colored movies La malagueña y el torero y Le Tango, we have identified one of the performers. La Bella Romero (real name, Elsa Romero) was born in Malaga in the late nineteenth century. By early 1902 she was dancing tangos and sevillanas in Madrid (El Globo (EG) 1902, Madrid, 3 January, 3). In 1903 she debuted at the Teatro Novedades in Barcelona, where she was a great success. Her fame continued to grow. She even performed with La Fornarina and appeared in films.

La Romera is the star of Le Tango and can be seen as one of the chorus of clappers in La malagueña y el torero, this time with her head uncovered. Below are some comparison images that show how the identification (originally made by the Filmoteca Española) was made.

Gaumont produced a colorized remake of the Lumière film  La malagueña y el torero, under the same title, in 1905. It and Le Tango were shot consecutively, as the stage and the flamenco group, formed by six artists, two women and four men, are the same in both films, with small changes in wardrobe and some differences in the color applied in post-production. Dancers who were clapping time in the background in one film move to the forefront in the other. A close study of the background reveals that it is one of the most evocative buildings in Seville: the Casa de Pilatos, a palace with Gothic, Moorish, Renaissance and romantic elements. The Casa de Pilatos' central courtyard built in the late fifteenth century is perfectly recognizable in the images as the andalusí background of the scene.

The dance in the Gaumont version is clearly modeled on the earlier Lumière version, such as the moment the dancers enter with their capes (hand colored a garish, unrealistic green that would have made a Spanish viewer's jaw drop) draped over their body like matadors, and the sequence in which the male dancers kneel and extend the bullfighting cloth on the ground for the females to dance around. The differences: The Gaumont remake is twice as long, and features a series of classic bolero moves apparently choreographed specifically for the film.

Both are Gaumont films and have tentatively been attributed to Alice Guy.

For the first film, my original link disappeared, but I found the same film at minute 8:51 on the long video. Note that the dance that precedes it, with a painted backdrop, is not an Alice Guy film. It's from the Phono-Cineam-Theatre series shown at the Universal Paris Exposition in 1900. For many years it has been credited to Alice Guy in error.