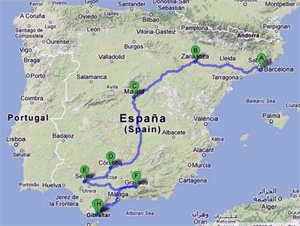 Alice Guy traveled around Spain for six weeks, from October 15th to the end of November of 1905,  filming in Barcelona, Madrid, Granada, Córdoba and Seville. Guy's mission was to film a series of chronophone films in Spanish and pave the way for Gaumont film distribution in Spain. Guy has also been tentatively credited with filming La Malagueña y el torero (1905) and Le Tango (1905) while on this journey.  Francisco Griñán has investigated her journey in a way never done before. Some of his results will soon be published in the journal The New Review of Film and Television. This blog contains images and links to support the article.

Gaumont produced a colorized remake of La Malagueña y el torero, under the same title, in 1905. It and Le Tango were shot consecutively, as the stage and the flamenco group, formed by six artists, two women and four men, are the same in both films, with small changes in wardrobe and some differences in the color applied in post-production.

The location is the Casa de Pilatos in Seville, a palace with Gothic, Moorish, Renaissance and romantic elements, whose central courtyard built in the late fifteenth century is perfectly recognizable in the images.

The Gaumont catalog of July 1906 and the 1907 edition lists a series of films shot in Spain under the title Voyage en Espagne.  No. 1.381 is entitled Danses gitanes: Marengaro, one of four Spanish dances. Another one is called Sévillane (nº 1.382). The Filmoteca Española matched these titles with La Malagueña y el torero y Le Tango respectively. An attribution that this author also initially accepted but is clearly erroneous. Gaumont has recently digitized a number of its early films, including a film entitled Marengaro (1905) (see them at the end of the reel below). Examination of the video proves that it is a different film from La Malagueña y el torero (1905).

Marengaro is one of four films Alice Guy made of gypsies, shot in Seville or Granada (it is almost impossible to identify the location). In Marengaro, a gypsy couple, in traditional Andalusian costume, dance to a chorus of other gypsies clapping the rhythm and strumming guitars. It is possible that this film was originally recorded with synchronized sound, but difficulties with the chronophone apparatus doomed all the sound elements from the trip.