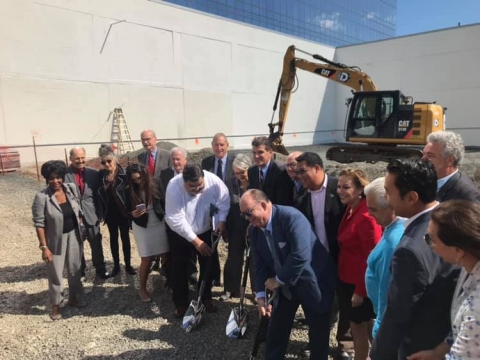 Yesterday Tom Meyers and other members and supporters of the Fort Lee Film Commission broke ground on the Barrymore Film Center in Fort Lee NJ.

Here's the description of the planned Center from the Film Commission's website:

The center will include a 260-seat cinema and attached film museum to be built on the very street where the American film industry was born over a century ago. The BFC will showcase classic American and foreign films, art house films, films of emerging filmmakers, student films and numerous film festivals throughout the year including one operated by the Fort Lee Film Commission. In addition, the Fort Lee Film Commission will operate a yearly silent film festival to showcase the films produced here in Fort Lee, NJ as well as silent films from around the world. These films will be screened with live music as the cinema will include a musician's pit. The BFC will also operate a student filmmakers boot camp as part of our annual Jersey Filmmakers of Tomorrow High School Student Film Festival and the top student filmmaker each year will win our James Gandolfini Best of the Fest Award named after the New Jersey native and famed actor. The BFC will work with film archives from across the country and around the world to bring film programs, museum exhibits and speakers into Fort Lee, NJ, the birthplace of the American film industry.

You can see a video trailer of the planned center here:
https://vimeopro.com/sirk/bfc