It’s really tough to move to a new state and a new town under any circumstances, let alone during a pandemic. So it was wonderful to open a neighborhood newspaper and see a full-page article on the Wilton Town Hall Theater’s Silent Sunday Film Series. Musician and silent film expert Jeff Rapsis selects silent films he know his audience will like — or at least will enjoy discussing. I made sure to be there well before the screening started, mask, hand sanitizer, and all!

The Cover-19 pandemic and the attendant lockdowns has not been kind to small theaters. I’m a regular movie-goer, but like everyone else I haven’t been able to see a movie in the theater since March.

New Hampshire’s sage approach to lockdown and other measures to stop the spread of the the illness means that the state is now enjoying a slow and cautious re-opening. After being dark for four months, the Wilton Town Hall Theater is now showing films to a 50% capacity theater, temp checks and masks required. Rapsis brought back the Silent Film Series with a bang, starting with the Douglas Fairbanks 1924 Swashbuckler, The Thief of Bagdad. The screenings are every other Sunday at 2 pm, and they are free ($10 donation suggested).

Rapsis started the session with an informative and entertaining introduction. But nothing he said could prepare me for the marvel that was Douglas Fairbanks Sr on the big screen. Fairbanks is shirtless in most of the film, and boy, was he eye candy! Not only did he look good, but he knew how to move—how to leap down from a balcony, climb up an enchanted rope, how to woo a princess.

Watching Douglas Fairbanks was a revelation! I’m so glad Rapsis and the Wilton Town Hall Theater will be showing all of his blockbusters this summer!

Screenings are free and open to all; a $10 donation per person is suggested (but not required) to help defray expenses. Check out this month's silent classic, shown below in the film section. He repeats the main points in his blogs about each film. You can see his blog on http://silentfilmlivemusic.blogspot.com/2020/07/restarting-silent-film-screenings.html

After the screening there is a discussion that seemed to last as long as the audience was willing to talk. This particular audience, a small one given the Covid situation, included someone who once met Douglas Fairbanks Jr.

Rapsis is a dedicated blogger, blogging about the film both before and after the performance. His blog on this Sunday’s film, like his talk, gives us insight into Fairbank’s career leading up to the film, and insights into the film’s production. Rapsis also talks about how he chose the music he played on his synthesizer to accompany the film, and talked about the state of moviegoing during the pandemic in general.

It was a fun afternoon, a rare opportunity to see a fabulous silent film the way it was meant to be seen, on a big screen, with live music, and with new friends that like silent cinema as much as you do.

It was really heartwarming for me, the stranger who is new to these parts. It seemed like within a week I’d found my people. Thank you, Jeff! 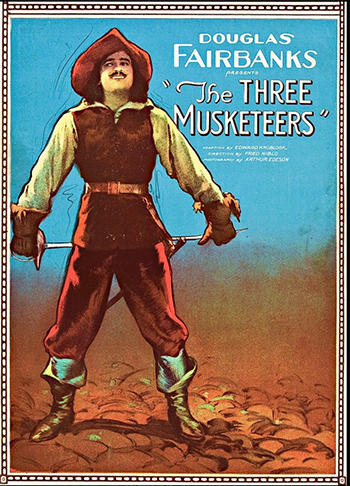 The rest of the Flying Monkey Schedule for this summer is as follows: